Just added to your cart

FREE GIFT with online orders over £150 >

What is the future of autonomous logistics?
Do you like the idea of trucks without Drivers?

HGV driver shortages has been hitting the headlines in 2021.

In July 2021, it was estimated that the UK had a shortfall of at least 76,000 drivers. That is a lot of supermarket shelves remaining unfilled, flu vaccines undelivered and even sewage left untreated as water purification chemicals cannot reach their destination.

The issue isn’t centred solely around the UK either, Germany has reported a shortfall between 45,000-60,000 truck drivers, France slightly less with around 43,000 drivers not on the roads and other European countries reporting similar gaps in their logistical requirements and HGV drivers.

Whilst Brexit and the Covid-19 pandemic obviously had a significant effect on these alarming statistics, with drivers unable to train and take their tests due to Covid restrictions, many market analysts have been predicting impending driver shortage issues for over a decade as driver supply has not kept up with rising global road freight demand. With factors such as an ageing workforce, challenging working conditions, combined with concerns over the public image issues of the profession, it is clear to see that we need to find new solutions if we are going to solve challenges facing the road freight industry. 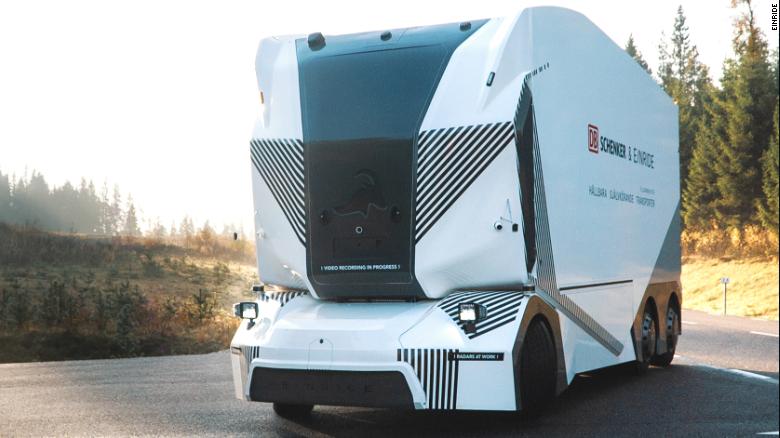 The images on this page show the driverless transport pod
developed by Einride AB, a Swedish Transport comany
pioneering this technology in Europe and, as from November
2021, in the USA. https://www.einride.tech/events

With the government launching a new initiative to attract and fast-track the process of training new HGV drivers, with up to 50,000 more HGV driving tests being made available each year and tests being simplified, it is hoped that new recruits can be attracted into the profession. But is this the long-term solution?

Many futurists have predicted that the potential long-term sustainable future of the HGV industry is the adoption of ‘driverless trucks’. Something from a sci-fi show? Probably not!

With millions of pounds being thrown into development and refinement of driverless vehicles and technology companies scrambling to be the first to launch a safe, effective driverless truck, the advent of this advancement in road freight seems to be on the horizon. According to Business Insider, “Tech leaders and financiers alike are confident that self-driving trucks will become the norm as early as the next decade.”

DID YOU KNOW- Google has been testing their self-driving cars since 2011 and has racked up millions of miles. During this time, there have been only 20 crashes involving a self-driving car, with only one of the crashes being at the fault of the car.

With this new technology aiming to revolutionise the logistics industry, many operators are very excited about the potential improvements in productivity, fuel efficiency, costs, and traffic on the roads that this innovation will bring to the industry.

With the push to bring in new drivers into the profession, and government initiatives to make it easier for people to enter the industry, the main thing on new, and existing, truck drivers’ minds is obviously the security of their jobs. Does the introduction of driverless trucks mean they won’t be needed anymore?

The simple answer is no, not all truck drivers are going to lose their jobs. In fact, many people believe that the introduction of self-driving trucks could lead to the opposite. As automated trucks become a more regular sight on our motorways, the volume of road freight is predicted to increase accordingly, and more people will be needed in those trucks. All of the main companies involved in testing their newly developed driverless trucks have indicated an intention of having a driver in the cab at all times. There are too many things that can potentially go wrong for there to not be a human in the truck when it’s operating on the road, as well as the vast majority of the public feeling a lot safer knowing a person is behind the wheel just in case of emergency.

With drivers expected to do less manual driving, which many drivers could see as a benefit, the role of a driver could become more aligned with that of an aeroplane pilot - safety checks, monitoring and intricate manoeuvring.

There are many developments and innovations to come in the near future, it may be that the road freight industry is at the dawn of a new, more efficient growth period. However, one thing will remain at the heart of every operation - Safety!

No matter the operation, technology or role of a truck driver, safety on the road will ALWAYS be the most important element of running a vehicle fleet. Whether it is ensuring wheel nut safety is a key consideration for your fleet, the safety of your employees or making sure your workshop is fully kitted out, Parma will be here to keep you safely on the road today, and into the future.

To see our full range of safety products, explore our website and see for yourself what Parma can do to support your fleet.